News regarding fearlessdaphne.com and its community of readers and contributors. 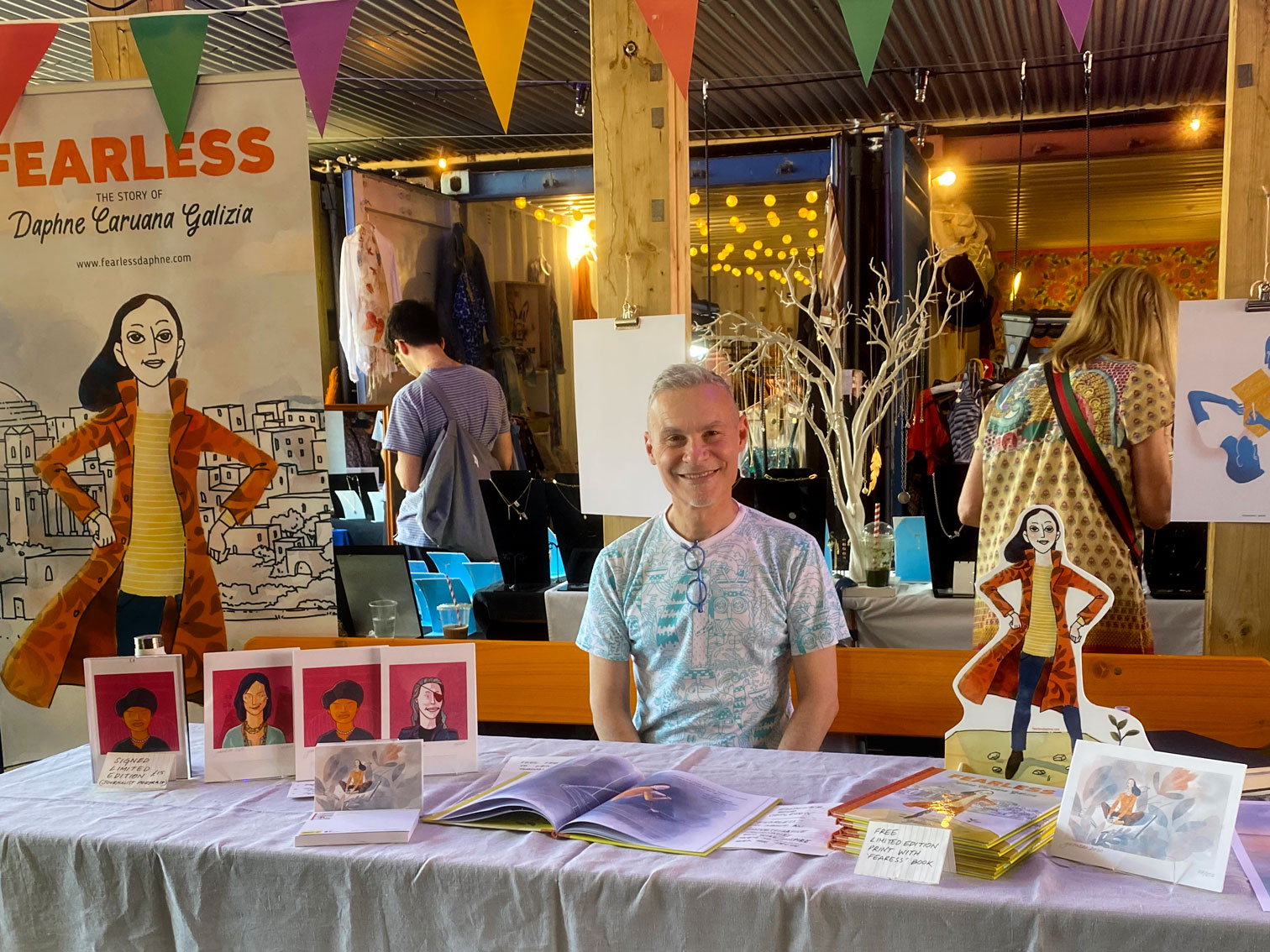 I'm so excited that a Maltese version of 'Fearless' is planned for the end of the year by local publisher Midsea Books. The translation is by a well known Maltese writer and the book will come with a special cover design which I'm currently working on. Look out for further announcements here. In the meantime, I've been planning some activities which my young readers in the UK will soon have the opportunity to participate in. For readers in Malta, I have a few activities planned for the Malta Book Festival.

Yesterday I was a guest on the culture programme Maltarti, on Malta's public service station.
‍
The interview, recorded at the end of last year, gave me the opportunity to reach an audience which might not otherwise have been accessible. I emphasised the value of journalism to democracy and the importance of media literacy. 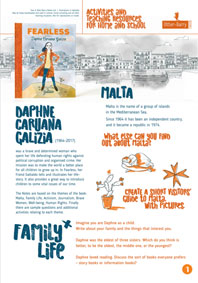 We've added teacher's notes for 'Fearless' which you can download with activities to use in class.
‍
The themes include activism, journalism, inspiring women, human rights, family and Malta. Click here to download the notes. 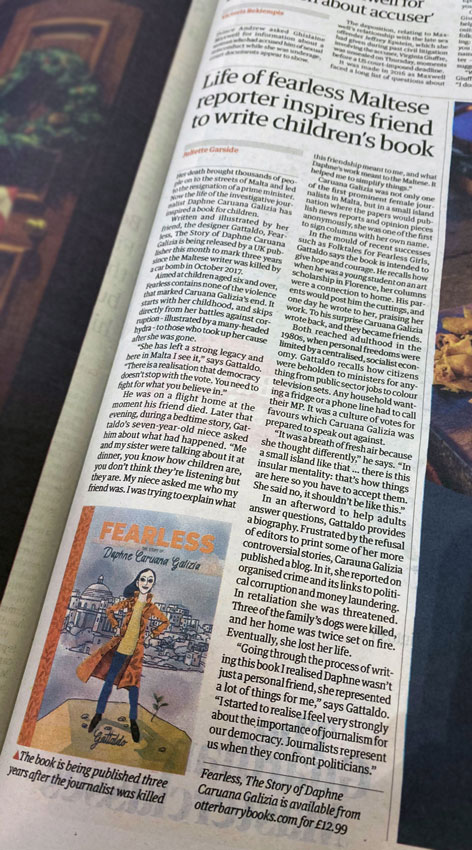 'She left a strong legacy'

Last weekend has been rather significant for me. The Guardian featured an article on my children's book 'Fearless, The Story of Daphne Caruana Galizia' by journalist Juliette Garside.
‍
Here's the link to The Guardian article on Saturday.

But it doesn't end there. The day after, National Italian newspaper La Repubblica wrote a follow up article as well, and then a Canadian news website and several Turkish news websites followed. 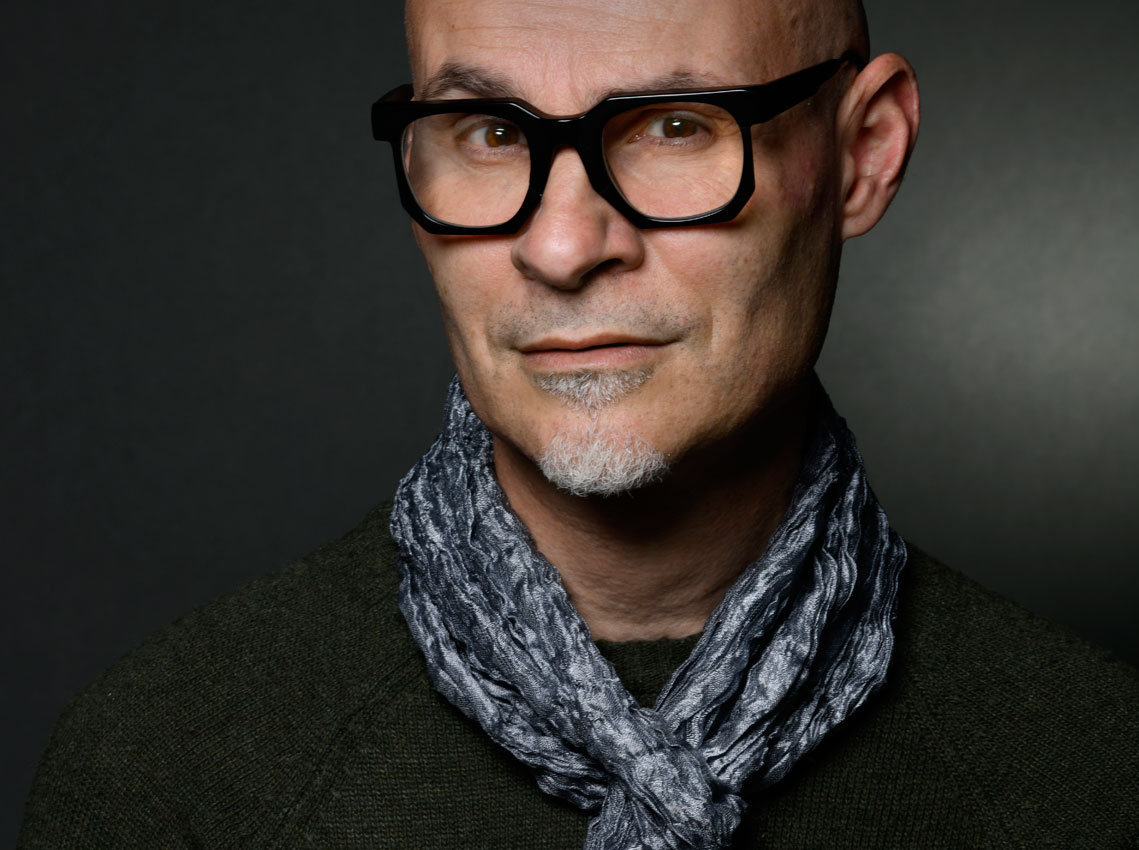 'Fearless, The Story of Daphne Caruana Galizia'.
Saturday 24th October between 11.00am and 02.00pm
Agenda Bookshop, The Point Shopping Mall, Sliema.
‍
Gattaldo (That's moi!), the author of 'Fearless' will be present to sign your copy of the book. It's a great opportunity for me to meet some of my readers and future readers. Please bring your face mask and keep your distance from others. If it's crowded at the time you arrive, return a bit later. Staying safe is important.

For those children who wish to hand in their Plucky competition entry (see below), you can leave it with me.

I look forward to meeting you! Many thanks. 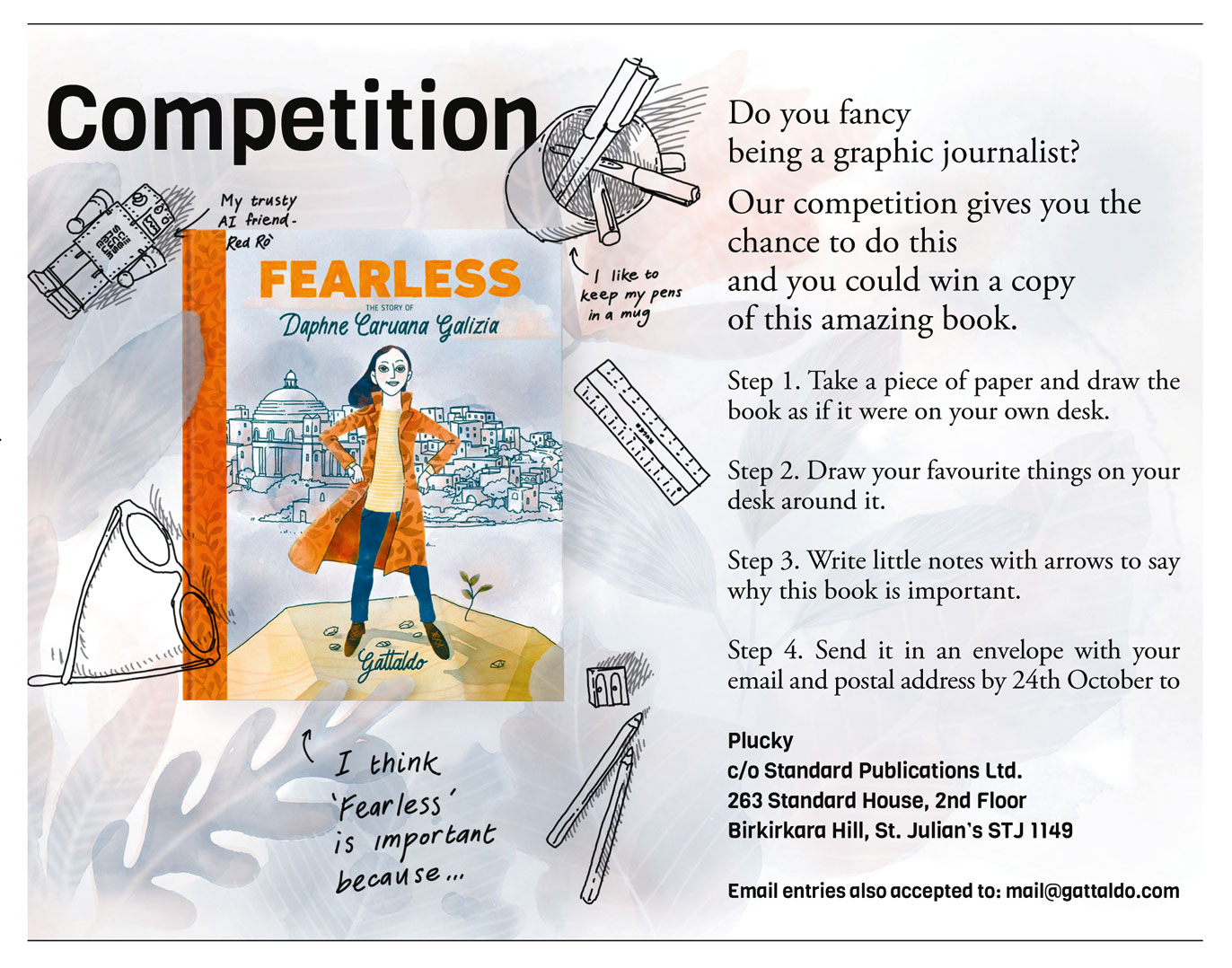 The Legacy of Truth

The Legacy of Truth - The Malta launch of Fearless, The Story of Daphne Caruana Galizia.
Saturday 17th October at 6:30pm (5.30pm UK time)
‍
The children’s book ‘Fearless’ gives us the opportunity to discuss the importance of media literacy in education and the groundbreaking Maltese journalist’s legacy. Daphne’s work lives on. The stories she reported on are surfacing again and recent events are witness to the truth in the stories she exposed.

An even more positive outcome for Malta has been the emergence of independent news platforms, a civil movement and a new awareness of the power within each and every one of us. The Maltese are casting aside the idea that democracy stops with the vote.

‘Fearless, The Story of Daphne Caruana Galizia” is about Daphne’s belief in journalism as an effective tool for truth and justice. Will its message get through to future generations of politicians, journalists and citizens?

To discuss this, our virtual event will have Rebecca Vincent of Reporters Without Borders in conversation with author Gattaldo, alongside journalists Matthew Caruana Galizia and Caroline Muscat, founder of Shift News, and journalist/children’s author Juliet Rix.

REBECCA VINCENT is the Director of International Campaigns for Reporters Without Borders. She is an American-British human rights campaigner, writer and former diplomat with an expertise in freedom of expression. Rebecca has coordinated a number of high-profile international human rights campaigns. She serves on the External Advisory Council for the High Level Panel of Legal Experts on Media Freedom, as well as the Advisory Committee of the Rory Peck Trust, and the Advisory Council of the Foreign Policy Association. She holds an MA in Human Rights from University College London and has published widely.

GATTALDO is an award-winning Creative Director and illustrator. He studied art in Florence and now lives and works with his partner in London. Fearless, The Story of Daphne Caruana Galizia is Gattaldo's first children's picture book. He was inspired to create a book about the journalist when he saw how the story of her fearless journalism stirred the imagination of his young niece and nephew. Gattaldo wrote and illustrated ‘Fearless' for other children the world over to share.

JULIET RIX is an award-winning British journalist, editor, broadcaster and author whose work has featured in the Guardian, Telegraph, Times and on BBC Radio amongst others. Juliet is also the author of the bestselling Bradt Travel Guides on Malta. Her most recent book for children, Travels with my Granny, takes young readers all over the world and, when needed, provides a simple, positive, expert-endorsed way to explain dementia to the very young.

CAROLINE MUSCAT is a Maltese award-winning investigative journalist and the founder of The Shift, an online investigative news portal based in Malta. Her main areas of focus are corruption, human rights and environmental issues. Her work has been featured in a number of international publications and she has been interviewed on press freedom issues by major international media including Al Jazeera, BBC World, Euronews, The Guardian, and ZDF. She was awarded the Reporters Without Borders Prize for Independence in 2019 for her dedication to investigative journalism in the public interest in a hostile climate.

MATTHEW CARUANA GALIZIA runs the Daphne Caruana Galizia Foundation, which is dedicated to achieving justice for his mother, the investigative journalist who was assassinated in a car bomb attack in Malta in 2017. He is a software engineer and journalist who worked at the International Consortium of Investigative Journalists (ICIJ) on several global, collaborative investigations. ICIJ and its partners won the Pulitzer Prize for explanatory reporting on the Panama Papers, a few months before his mother was assassinated for her investigations into high-level government corruption in Malta. 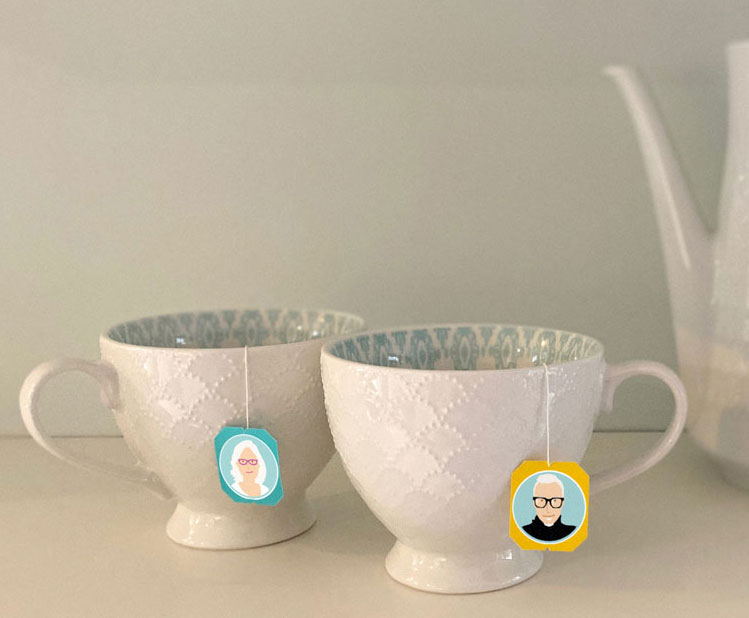 Join us for virtual chat and tea

Fearless Daphne - The girl who wanted to tell important stories.
Tuesday 6th October at 6:30pm
‍
On the occasion of the publication of children’s book - “Fearless, The Story of Daphne Caruana Galizia”, Juliet Rix will be interviewing its author Gattaldo over a cup of tea.

JULIET RIX is an award-winning journalist, editor, broadcaster and author whose work has featured in the Guardian, Telegraph, Times and on BBC Radio amongst others. Juliet is also the author of the bestselling Bradt Travel Guides on Malta. Her most recent book for children, Travels with my Granny, takes young readers all over the world and, when needed, provides a simple, positive, expert-endorsed way to explain dementia to the very young.

GATTALDO is an award-winning Creative Director and illustrator. He studied art in Florence and now lives and works with his partner in London. Fearless, The Story of Daphne Caruana Galizia is Gattaldo's first children's picture book. He was inspired to create a book about the journalist when he saw how the story of her fearless journalism stirred the imagination of his young niece and nephew. Gattaldo wrote and illustrated ‘Fearless' for other children the world over to share. 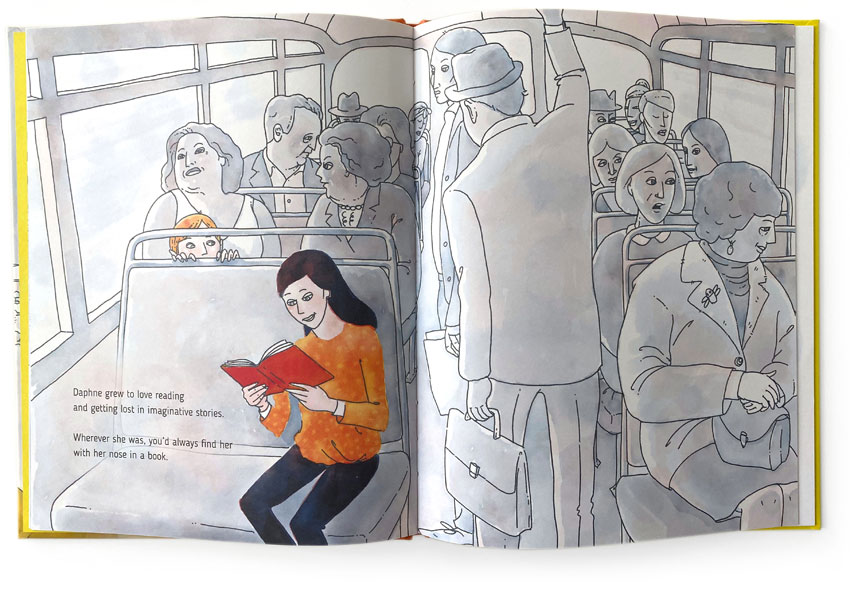 “Daphne was a journalist. She fought against injustice and lies. Her real-life story here told in pictures and words focuses on what we can all learn from her example: how our childhood dreams can be fulfilled, the intense place reading can carve out in our imaginations and hearts, the need to think and to ask questions. As Daphne grows up, still her example shines through to us: work hard, love each other, keep fighting the good fight.“

Read the rest of Ben Harris's review of the book ‘Fearless, The Story of Daphne Caruana Galizia’ here. 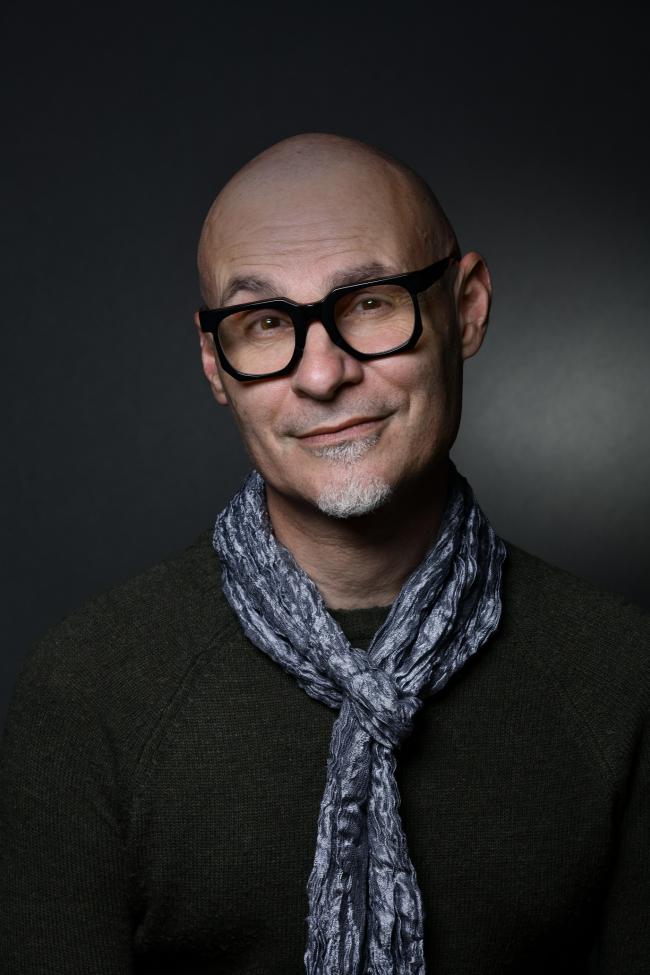 A picture book released next month aims to promote good journalism to children through the story of a journalist killed in Malta three years ago.‘

Fearless – The Story of Daphne Caruana Galizia’ is the first children’s book by London-based artist and illustrator Gattaldo, a nickname the 53-year-old picked up while studying fine art in Florence, Italy.

Former Ealing resident Gattaldo, who grew up in Malta and left aged 20, hopes the book will encourage children to get the most out of information and increase their knowledge of complex subjects.

Read the rest of the article on The Ealing Times. 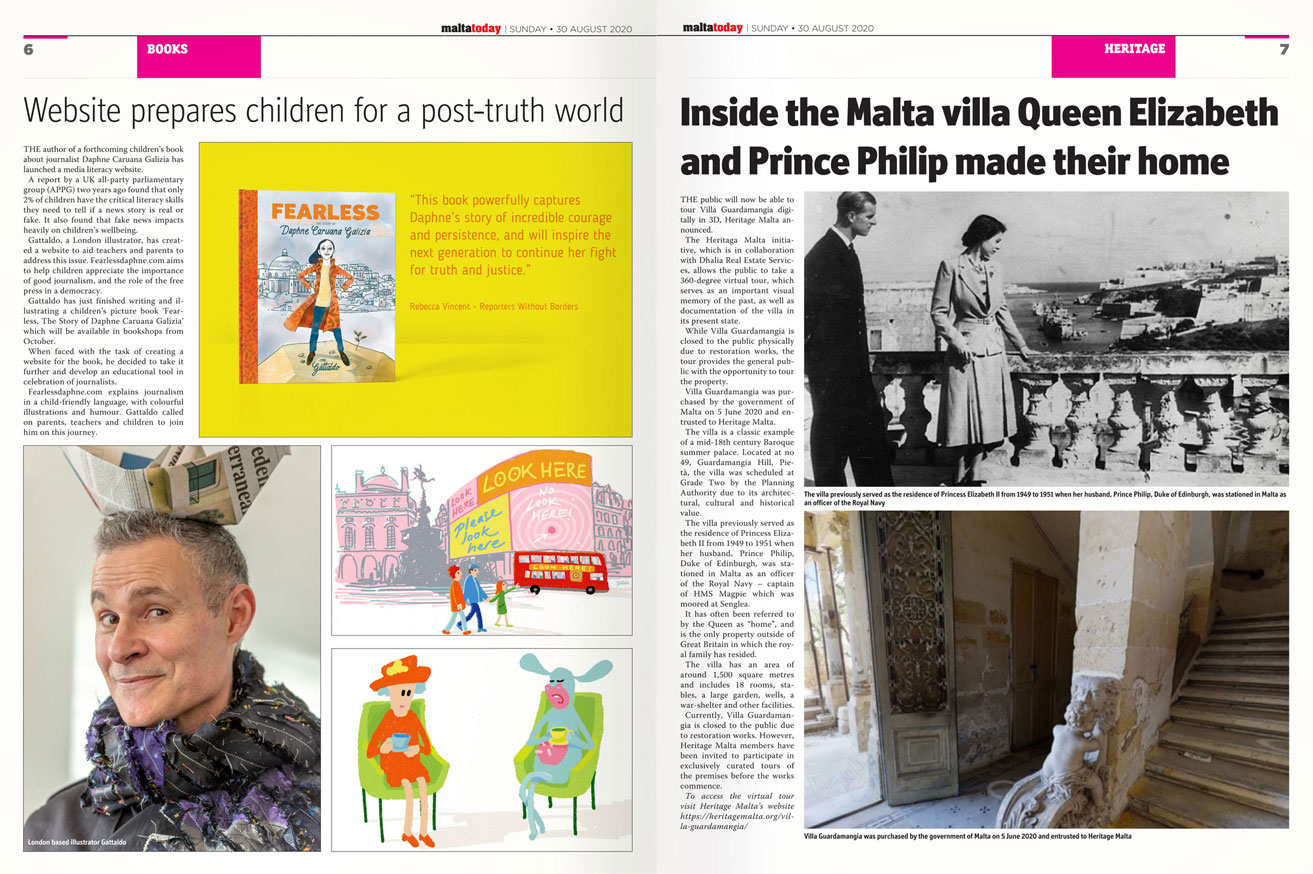 A report by a UK all-party parliamentary group (APPG) two years ago found that only 2% of children have the critical literacy skills they need to tell if a news story is real or fake. It also found that fake news impacts heavily on children’s wellbeing.

Read the rest of the article on MaltaToday. 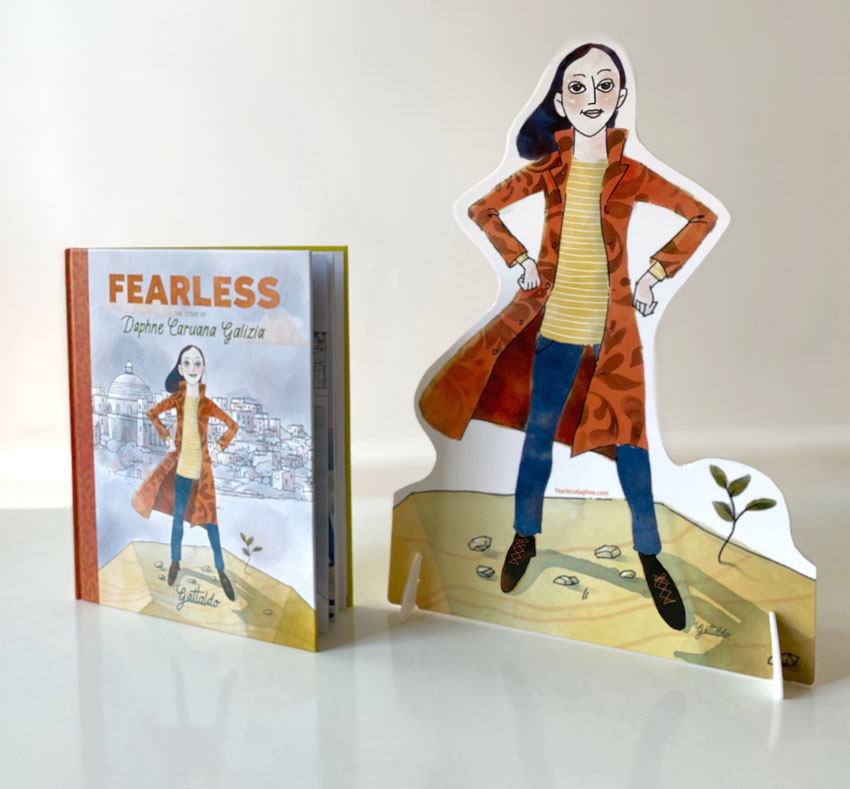 I'm thrilled at some of the marketing materials for the book "Fearless" that has just arrived from the printer's. We've got a limited number of display cut-outs (picture) to place in shop windows and postcards and stickers for readers. 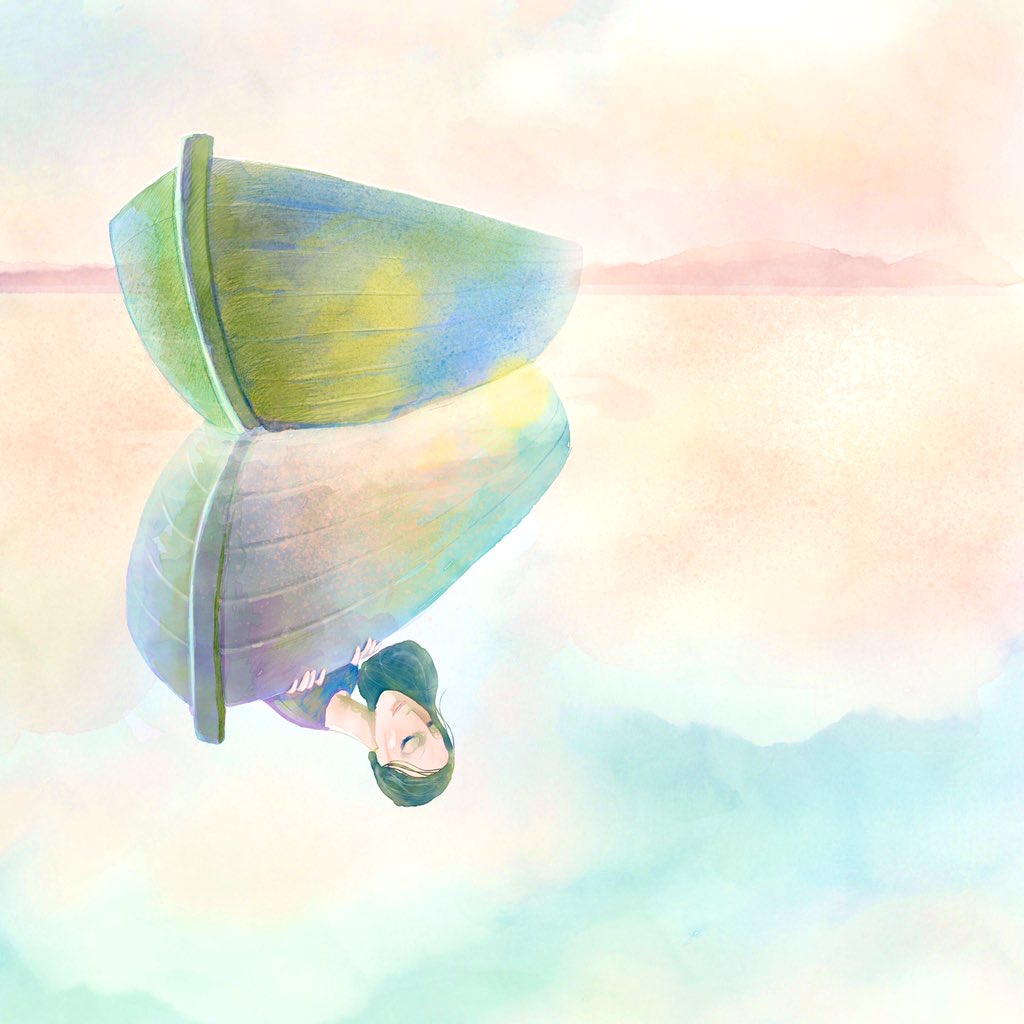 My article for the September issue of The Sunday Circle Magazine is my tribute to late journalist Daphne Caruana Galizia.

Since that fateful day on October 16, 2017, I’ve attempted to come to terms with the loss of a friend, the loss to my country, and the loss to journalism. At times they merge, and it’s difficult for me to decipher which is which. It has been a tumultuous journey and I wonder if others will recognise parts of this as their own over these last three years.

Continue reading the article on The Sunday Circle. 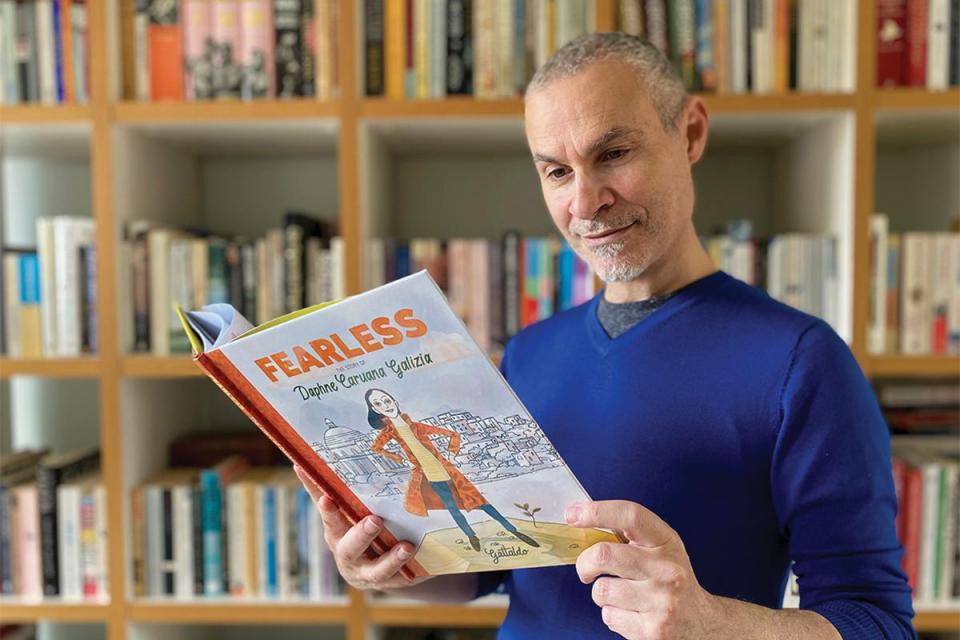 These last two weeks have been terrific. First Janetta of Otter-Barry Books sends me an advance copy of my book and it looks absolutely incredible. Then the Sunday Times of Malta journalist Fiona Galea Debono contacts me to feature fearlessdaphne.com on The Times of Malta.

Fiona asked me about my friendship with Daphne, how the website and the book came to be, and loads more. You can read Fiona's article here. 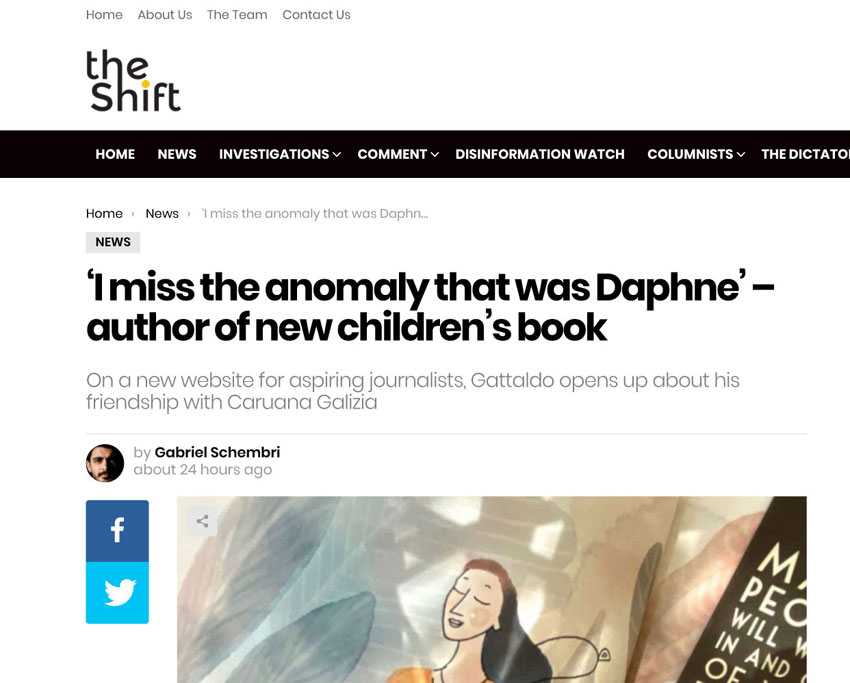 I wasn't quite prepared for all the positive feedback our new website garnered on social media as soon as it went online.

Fearlessdaphne.com even featured in an article by Gabriel Schembri on news platform The Shift News yesterday, describing it as "Colourful and creative".

The Shift News also mentioned my new book 'Fearless' about journalist Daphne Caruana Galizia which comes out this October. You can read the article here.

#Journalists Explained for Kids |
Very much needed to be covered in primary school curriculum in all schools worldwide, but especially in #Turkey, the world's biggest jailer of journalists.
See "What is a journalist?" By Rebecca Vincent and @FearlessDaphne https://t.co/OMJBI1IzQu

Here's a great illustrated resource for young children, inspired by inspired by the story of #DaphneCaruanaGalizia, on what #journalists do and the critical role they play in a free society. https://t.co/v3ZZSIkxdu 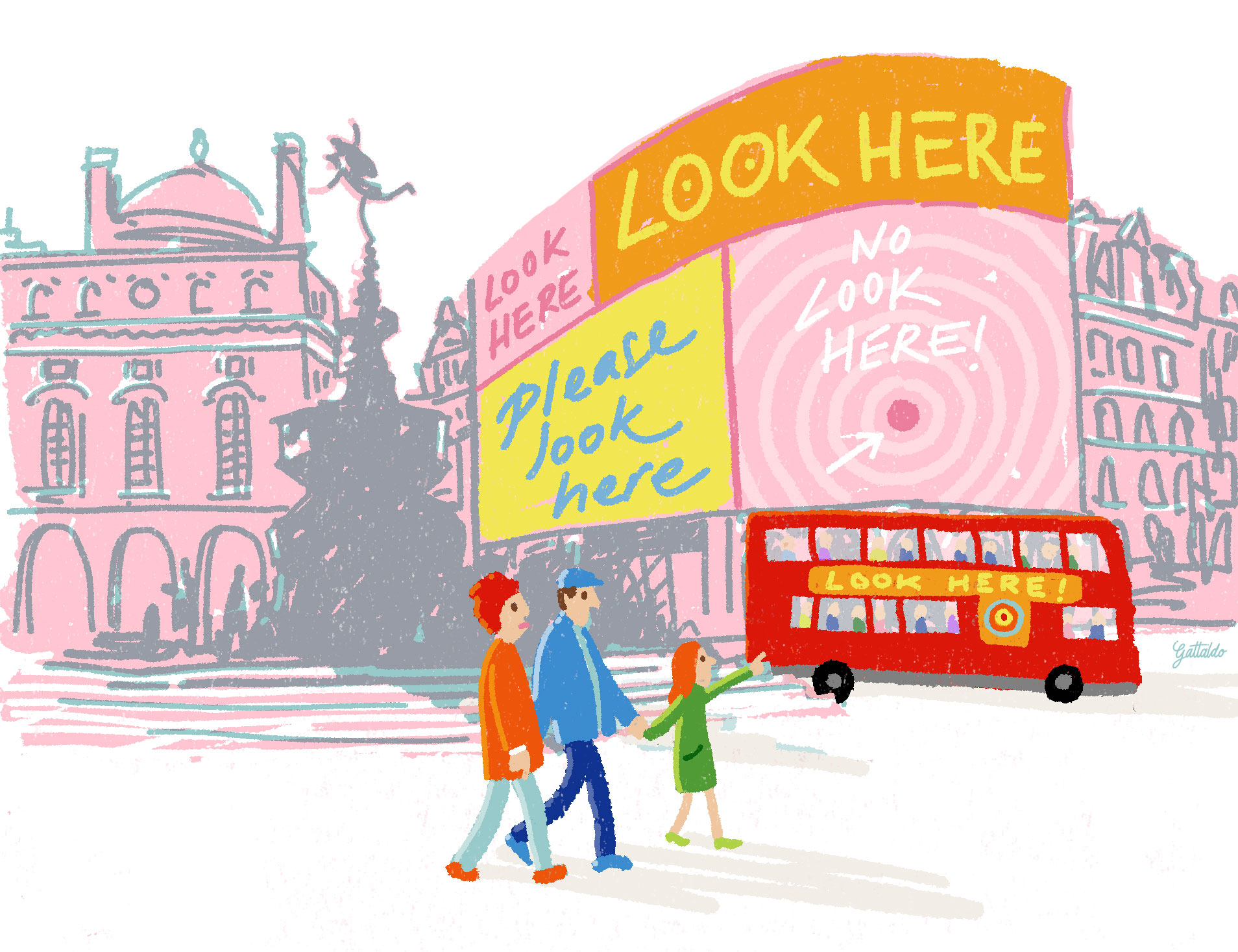 It's been a long journey and a steep learning curve for me but the time has finally come to launch our website. I would like to thank all those who have helped, in particular Juliet Rix, Rebecca Vincent, Nicky Parker, Janetta Otter-Barry, Tina Urso and Clare Vassallo. Their support and guidance has proved indispensable.

I haven't planned anything special for the launch itself. We're all in lockdown but that doesn't mean I won't celebrate with a bottle of bubbly and some cake.

I would also like to thank those parents and teachers who have kindly answered my many questions. We need more people like yourselves to give us tips on how we can make this a more useful website.

I also welcome collaborations with teachers who would like me to help them with a project for their class. Please feel free to contact us.